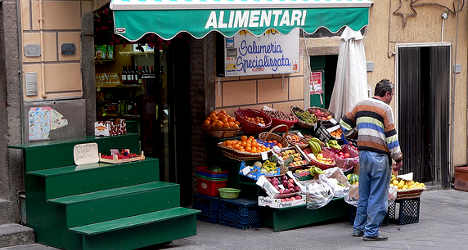 Around 100 protesters blocked rail traffic at Turin's main stations, before heading to the headquarters of the Italian tax collection agency, Equitalia.

Demonstrators hurled bottles, stones and firecrackers at the building, and police responded with tear gas. One officer was slightly wounded in the clashes.

Protesters also hurled stones at the Piedmont regional government headquarters, with around 2,000 people gathered outside the building at midday.

Stores pulled down their shutters as protesters disrupted tramway services and battered a television news truck from the 24-hour channel Sky TG24.

The protesters were linked to the Pitchfork (Forconi) movement, which started in Sicily among farmers who fear rising taxes are a threat to their livelihoods.

From farmers the movement spread to other small businesses from craftsmen to store owners and truck drivers.

Around 100 similar rallies were planned across Italy on Monday, from Rome and Milan to Palermo in Sicily.