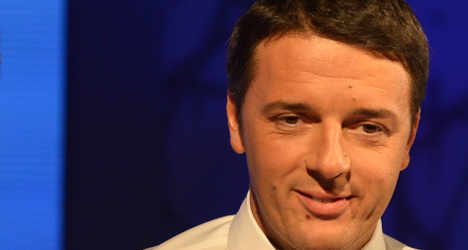 Matteo Renzi said there was "not a minute to lose" as he announced a 12-strong team that did not include any of the party's old guard.

The 38-year-old party leader, who won a landslide victory in Sunday's election, said the new line-up would include seven women and have an average age of just 35.

"I feel the responsibility, the task ahead is hard, but I am aware of the need to give an immediate signal, there is not a minute to lose," he said at his first press conference as party leader.

"We will debate, but not forever. With the primaries, the Italians have demanded an acceleration," he added.

Around 2.5 million Italians voted in Sunday's leadership election – a higher turn-out than expected – with around 68 percent picking Renzi as party leader.

Renzi said he would prioritize reform of Italy's widely criticized electoral law, parts of which were this month declared unconstitutional by the country's top court.

Renzi's election marks a transformation for the Democratic Party (PD) as he did not rise through the ranks of what was once western Europe's largest communist party.

Despite being a product of the more moderate Christian Democrats Renzi, who has vowed to overhaul the party, on Sunday insisted that his election was "not the end of the left".

"We are changing the players but we are not going over to the other side of the pitch," he said.

Renzi has pushed for more cuts in spending on Italy's unwieldy bureaucracy – amid widespread anger over high salaries for public officials even during a painful recession – as well as a greater focus on education.

He has also long campaigned against the ageing leadership of his own party and pushed for a more centrist programme, although leftist critics accuse him of being thin on concrete proposals.

His supporters however say that if he had won against Pier Luigi Bersani, now 62, for the party leadership in 2012, the party would have won handsomely in the February general elections.

Renzi is expected to hold talks with Letta before the prime minister delivers a speech to parliament on Wednesday to formally request a confidence vote after Silvio Berlusconi and his supporters quit the ruling coalition.

The government can survive despite Berlusconi's move because around 50 moderate MPs quit the former premier's Forza Italia party and created their own, which will support Letta.