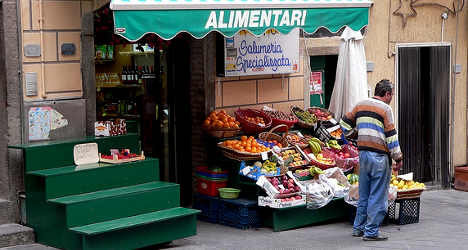 The third-biggest economy in the eurozone, Italy stagnated in the third quarter, revised data showed, in an update of an earlier estimate of a 0.1 percent contraction.

The stagnation comes as a rare piece of good news, with doubts still deep on whether the fragile coalition government can safely steer clear from crisis.

Italy is especially burdened by a staggering mountain of government debt, more than two trillion euros, leaving it little room to manouevre and extremely vulnerable to the slightest financial shock.

The way forward, urged on by the European Commission and the IMF, is for Italy to implement big structural reforms, but patience for change by Italians is wearing thin after two years of recession.

On Monday, stone-throwing protestors clashed with police in Turin, in one of dozens of rallies called to demand tax cuts for small businesses.

The protestors were linked to the "Forconi" (Pitchfork) movement, which started in Sicily among farmers incensed by rising taxes.

From farmers the movement spread to craftsmen, store owners and truck drivers, all of whom are increasingly frustrated with reforms demanded by cost-conscious Rome.

A survey last week warned that Italy's economic crisis has slashed spending power in almost 70 percent of households and forced a growing number of young people to leave the country.

Hoping to stop the anger spreading, Italian Finance Minister Fabrizio Saccomanni leaped onto Tuesday's data tweeting that it "certified the end of recession".

"Imports and exports are restarting. There is still work to do, but the direction is the right one," he said.

Official data also showed industrial production up by a more than expected 0.5 percent in October.

"This means that in one way or another, the recovery is returning and is affecting several production sectors," said Employment Minister Enrico Giovanni.

The government has forecast the economy will take a turn into growth by the end of the year and for the economy to expand next year by 1.1 percent.

But economists remain nervous and point to weaknesses in the data, whose upward revision was only due to a boost in inventories, according to analyst Paolo Mameli of bank Intesa Sanpaolo.

Employers federation head Giorgio Squinzi warned that 12-month figures "remained in retreat" and that it was "too early" to call an end to the crisis.

Tuesday's data said the Italian economy had contracted by 1.8 percent over 12 months, instead of the earlier 1.9 percent.