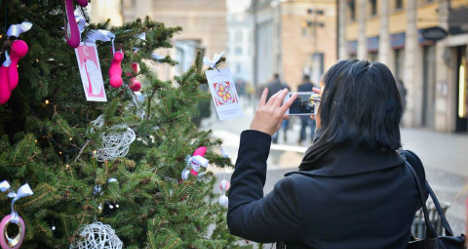 The Christmas tree in Milan was decorated with a variety of sex toys: Photo: Luca Matarazzo/MySecretCase

The Christmas tree, which went up on one of the city's busiest streets, was intended to advertise the launch of MySecretCase, a website specialising in sex toys for women, Corrier della Sera reported.

The website had reportedly received approval from the local council to display the tree on Via del Como, but police argued that they did not realize exactly what kind of decorations were going to be used.

“The nature of the project was not fully made clear in the request we received for authorisation” a note from the Milan council said. “On the basis of this discrepancy, we have begun the process of cancelling the project.”

Sex shops are banned from advertising in public spaces in Italy.

Around a hundred vibrators for passers-by to "see and touch" adorned the tree, while representatives from the company were on hand to explain how to use the various toys. Photos of its installation were posted on MySecretCase's Facebook page, accompanied by the hashtag '#sexyxmas'.

Norma Rossetti, one of the brand's three partners, defended the tree, saying: “It's much less vulgar than lingerie adverts or dancers you see on TV.” She added that they had received official authorisation and had paid a €4,000 fee to install the tree.

The tree has caused a divide in opinion of residents and passers-by, with some posing for pictures with it and others dubbing it “the tree of sin.”