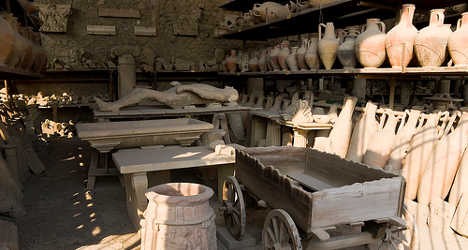 Money for restoration work at Pompeii has been siphoned off by criminal gangs. Photo: S J Pinkney/Flickr

The decision to put a crime-fighter in charge of one of Italy’s most important cultural sites comes after widespread reports that restoration money for Pompeii was being siphoned off by criminal gangs.

The site's neglect – earlier this month another wall collapsed in the ancient city – prompted UNESCO to threaten to take Pompeii off its World Heritage list if Italy did not act.

But while Nistri’s appointment may be tough on crime, archaeologist Sophie Hay says his appointment lacks vital expertise. “It is worrying that there will be a complete lack of archaeology specialists at the top level to advise,” she told The Local.

“I cannot understand this appointment without a similar position for an archaeologist to work alongside Magani…It risks making Pompeii all about the culture of tourism and not simultaneously treating it as the archaeological artefact it is,” said Hay, who has worked at the site.

Italy has rushed to act since the UNESCO warning in July, following a report at the start of the year which documented damage at the site.

In November, Italian authorities signed an agreement to create a buffer zone around Pompeii and install video monitoring by the end of the year.

In March, Italy gained a €105 million fund from the European Commission for restoration work, boosted by match funding from the state.

While Italy hopes the financial boost will benefit Pompeii, Hay said it is imperative to have on-site staff to ensure money does not go astray.

“What is important to the project’s success is having staff employed at Pompeii by the government to carry out maintenance, repairs and reconstruction. This was the old system and it worked.

“The new system of tendering for this type of work leads to potential corruption. The sooner this is realized the better,” she said.