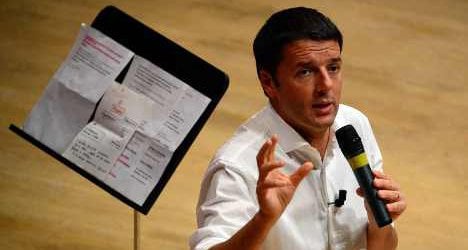 Who is Matteo Renzi?

He is the mayor of Florence and, as from Sunday, the leader of the Democratic Party (PD).

What happened on Sunday?

The PD held its leadership election, which Renzi won by a landslide with 68 percent of the vote.

He takes over from caretaker leader Guglielmo Epifani, who stepped in after Pierluigi Bersani resigned from the post in April.

This sounds like musical chairs. Why all the changes?

While Letta was busy trying to get the country together, Epifani was appointed temporary leader of the PD.

Where does Renzi fit into all of this?

Renzi had in fact challenged Bersani’s leadership in 2012, but came second to the older politician when party members voted last December.

While leaders were coming and going in April, Italians’ wishes were quietly ignored: 40 percent of centre-left voters said they wanted Renzi as PD leader.

Why is he so popular?

At 38, Renzi is decades younger than the ‘old guard’ of Italian politicians and, as a result, is seen as a symbol for change in the country.

Ahead of the 2012 primary election he launched a savvy online campaign, which echoed that of US President Barack Obama and propelled him from city mayor to national political player.

His supporters argue that had traditionalist voters not got in the way of his PD leadership efforts, he would have won national elections in February.

What about his policies?

Renzi has pushed for spending cuts on bureaucracy and for a stronger focus on education.

He is also pushing for greater gender equality, and on Monday announced a 12-strong team including seven women.

What has Renzi done at the local government level?

As leader of the province of Florence, from 2004 to 2009, Renzi lowered local taxes, boosted recycling efforts and promoted culture and innovation.

He wrote a book about his experiences as provincial leader, called Between De Gasperi and U2 (Tra De Gasperi e gli U2) – a reference to the historic leader of Italy's Christian-Democratic movement and the famous rock band. He went on to become mayor of Florence in 2009.

Is he a career politician?

Not entirely. Renzi worked for his family’s marketing company at the start of his career.

As the son of a local Christian-Democrat politician, he was however involved in politics at an early age and in 1994 created a committee to support Romano Prodi’s bid to lead the centre-left.

How about outside of politics?

Within his first 20 years of adulthood, Renzi has not only become leader of one of Italy’s main political parties, but has also had three children with his schoolteacher wife, Agnese.