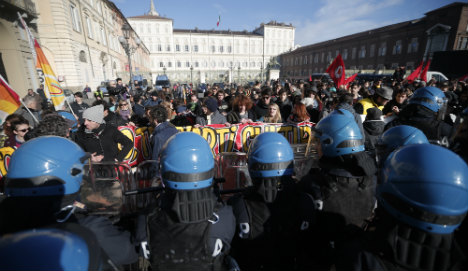 Students threw paint bombs at the police in Turin in northern Italy, a once-mighty industrial hub that has been laid low by the economic crisis and has been at the epicentre of protests that began this week.

Far-right activists wearing Italian flag masks and white nooses around their necks also rallied outside the European Commission's office in Rome and took down a European flag outside before being chased off by police.

In Venice, police fired tear gas to break up far-right and far-left protesters near the train station.

Two people were detained and around 10 police officers were lightly injured in the Venice protest, which forced the closure of a new bridge between two islands by award-winning architect Santiago Calatrava.

"The situation is very worrying because it is an expression of great social unease," Economic Development Minister Flavio Zanonato said at the opening of an airplane components factory near Milan.

"We must hurry up and re-launch our country," he said.

Speaker of parliament Laura Boldrini warned that "more fuel should not be added on the fire of this rage".

The Forconi movement, which originated in Sicily, is preparing to set up a picket in central Rome starting on Wednesday until its demands for fresh elections and a wholesale changeover of the ruling class are met.