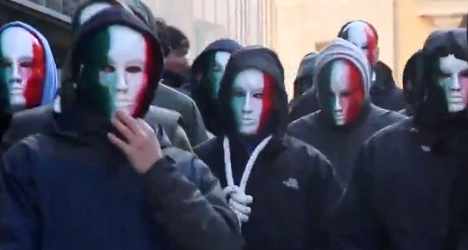 He was one of around 30 to 40 hooded and masked men that marched to the European Commission building in central Rome, brandishing Italian flags and a “Some Italians don’t surrender” banner.

Di Stefano scaled a ladder brought by protesters to the Commission, the EU’s executive body, and removed the flag against orders from police below. A video of the incident (below) shows the Casapound supporters clashing with riot police as they are pushed away from the building.

Responding to news of Di Stefano’s arrest, Casapound said it was a “grotesque ploy to stop popular protest” and on Monday morning held a demonstration calling for his release.

The neo-fascist group, named after poet Ezra Pound, was founded in 2003 following the occupation of an abandoned building in Rome.

Watch the video of the protest at the Commission: