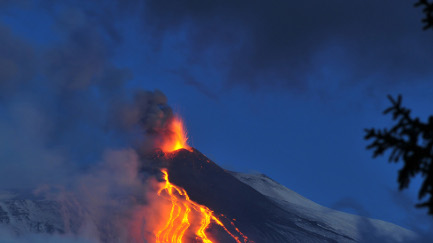 Catania, along with the smaller airport of Comiso, was closed on Sunday due to the clouds of ash in the sky.

The company that manages Catania, Società Aeroporto Catania (SAC),said the "direction and intensity of the wind" meant that ash from the eruption was a danger to flights.

Dozens of flights were cancelled on Monday and were re-routed to Palermo also in Sicily or to Reggio Calabria in the neighbouring Calabria region.

Eruptions on Etna are relatively frequent but the latest activity, which began on Saturday, is the most intense in several months.

The lava flow can be seen from Catania and Taormina.