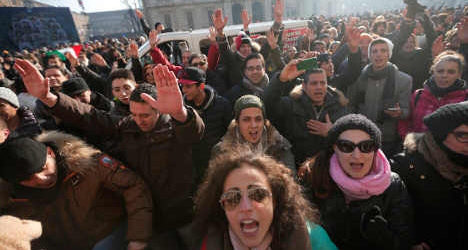 An estimated 15,000 anti-austerity protesters are expected to converge on Rome's Piazza del Popolo at 3pm in what Il Messagero newspaper has described as "black Wednesday".

Casapound, the Fascist movement, has also said it will be involved in the protests because it's been "close to the movement from the first moment", the newspaper reported.

The movement was originally composed of truckers and farmers opposed to tax hikes, but  has since grown into a group for the country's anti-government masses. It said it will picket Rome until its demands for fresh elections and a wholesale changeover of the ruling class are met.

The protests started almost two weeks ago in Sicily and have since spread across the country, gradually become more violent. On Saturday, students threw paint bombs at the police in Turin in northern Italy, a once-mighty industrial hub that has been laid low by the economic crisis and has been at the epicentre of protests.

Far-right activists wearing Italian flag masks and white nooses around their necks also rallied outside the European Commission's office in Rome and took down a European flag outside before being chased off by police.

In Venice, police fired tear gas to break up far-right and far-left protesters near the train station.

Two people were detained and around 10 police officers were lightly injured in the Venice protest, which forced the closure of a new bridge between two islands by award-winning architect Santiago Calatrava. Numerous probes have also begun into looting.

Andrea Zunino, a spokesman for Pitchfork, sparked outrage from Jewish communities last week when he said Italy is a "slave to Jewish bankers". READ MORE HERE.