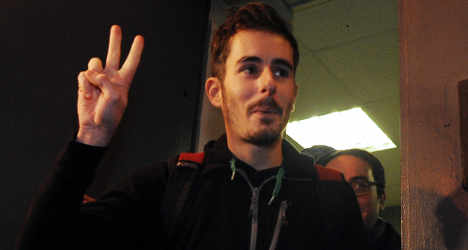 Russia's Duma lower house of parliament voted 446 in favour to none against for the amnesty, which commemorates 20 years since Russia ratified its current constitution.

The bill, branded as just a token gesture by rights activists, can go into effect as early as Thursday.

The initial bill listed hooliganism and mass riot charges, but said that only convicts can seek amnesty. The parliament then passed amendments that stipulated cases on those charges to be closed even before reaching trial or verdict.

The amendments effectively meant that prosecution of the entire Greenpeace crew arrested after a protest in the Barents Sea and charged with hooliganism would end and the foreigners now staying in Saint Petersburg could finally go home.

The amnesty does not require approval by the upper chamber of parliament and will go into effect when it is published.

The 26 foreign crew from the Greenpeace Arctic Sunrise ship will then request to leave, and still hope to be home by Christmas, said spokesman Ben Stewart.

"There is certainly a chance, but until they actually leave Russia everything is speculation," he said.

D'Alessandro, 32, was arrested with others after the ship was boarded by Russian special forces in September and was first held under arrest in a jail in northern Murmansk, where the ship remains in Russian control.

Last month the entire crew was released on bail, but Greenpeace said the foreigners are still not being allowed out of the country, with Russian investigators not giving migration officials a green light to issue exit visas.

The amnesty should also see several anti-Vladimir Putin protesters, jailed after a May 2012 rally, walk out of prison.

The jailed members of Pussy Riot punk band, Nadezhda Tolokonnikova and Maria Alyokhina, who are serving two-year sentences on charges of hooliganism for staging an anti-Putin "punk prayer" protest in a cathedral, could be released as early as Thursday, Tolokonnikova's husband said.

The officials in Krasnoyarsk and Nizhny Novgorod, where the two women are currently held, have promised to free them "right away and without bureaucratic delay, probably tomorrow," Pyotr Verzilov wrote on Twitter.

The duo's sentences run out in early March of next year.