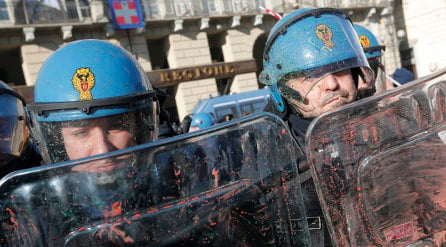 Thousands of protesters from the Pitchfork movement, and far rights activists, demonstrated in Rome on Wednesday. Photo: Marco Bertorello/AFP

"For everyone's good, you should all resign," read a placard held up by one of between 2,000 and 3,000 people on Rome's central Piazza del Popolo square.

Organisers said they had expected 15,000.

Some of the protesters set off smoke flares like those used by football fans and sang the national anthem.

The protest took place amid a heavy security presence and there was an outbreak of violence when an Italian television crew had their camera broken as some of the protesters shouted "Journalist terrorists!"

The Forconi movement, which is divided between radical and moderate wings, is an anti-European group that wants more national sovereignty and lower taxes.

It began as a farmers' movement in Sicily and has grown to include truck drivers and students. With a series of protests starting last week, the Forconi snarled traffic in several cities with truck pickets.