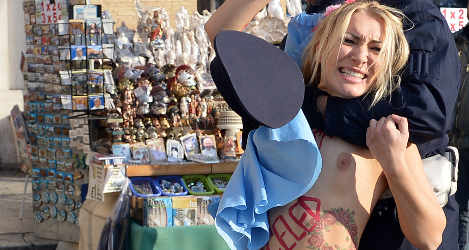 Inna Shevchenko was arrested outside St Peter’s square, with “Christmas is cancelled” written in paint across her torso and “abortion” written on her arm.

Speaking to The Local from Paris, fellow activist Alexandra Shevchenko said the stunt was part of a wider protest planned in Spain and elsewhere.

“This is a day of action for Christmas against that Catholic Church that says women don’t have rights to have an abortion," she said.

"Our body is our right and our own ownership and we should decide what we do with it – not the church, men or doctors."

The Vatican stunt follows arrests earlier in the year when Femen activists protested against the Catholic Church during the papal election conclave to elect Pope Francis.

The group campaigns on a broad range of issues from the sex industry, described by Femen as “genocide against women”, to fighting against theocratic Islamic states.

In February, activists stormed a building where Silvio Berlusconi, the former Italian prime minister, was voting in national elections. They were bundled out of the building screaming “Basta Berlusconi!” (“Enough Berlusconi!”).

The group also appeared at the Venice film festival in September to promote a documentary about the feminist movement.