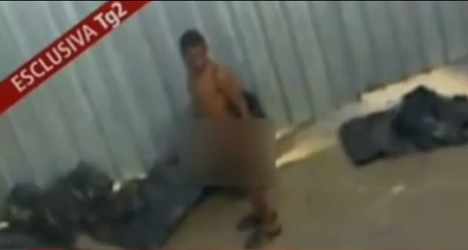 The video was shown by state broadcaster Rai on Monday. Screenshot: Rai/Tg2

The decision by the Legacoop cooperation to fire its staff at the Lampedusa centre came two days after the footage, filmed by a migrant, was shown by state broadcaster Rai.

The management will be replaced “to immediately start better organization with other professionals”, Legacoop said in a statement released on Wednesday.

“Behaviour like this is not acceptable, it is against the cooperative’s ethics and so they must be removed and punished,” Legacoop said.

The response follows international condemnation of the treatment of migrants in Lampedusa, who were reportedly subjected to the hosing down with disinfectant to combat scabies they had picked up on the island.

The scenes were described as “appalling and unacceptable” by Cecilia Malmström, the EU’s home affairs commissioner.

New images from #Lampedusa are appalling and unacceptable. We are contacting Italian authorities to shed full light over these events /CM

Lampedusa Mayor Giusy Nicolini said the footage reminded her of a “concentration camp”, while Laura Boldrini, president of the Chamber of Deputies, said it was “shameful for a civil country”.

But the head of Lampedusa Welcome (Lampedusa Accoglienza), which runs the centre under Legacoop, accused the migrants of faking the footage. Those filmed had “clearly staged the images seen,” Cono Galipo said in a radio interview on Wednesday.

Legacoop however distanced itself from Galipo’s comments and said “there can be no justification for what has happened”.

The cooperation pointed to the “absolute precarious situation” at the Lampedusa centre, built for 250 people but currently housing 600 migrants after a peak of 1,200.

By late October, more than 13,000 people had sought asylum in Lampedusa this year.