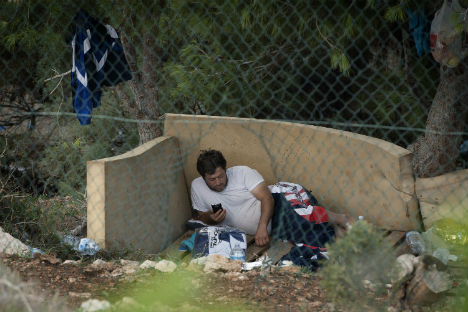 A migrant rests inside the Temporary Permanance Centre refugee camp, on the italian island of Lampedusa in October. AFP/Roberto Salomone

The men, aged between 20 and 30, used a thread from a blanket and a small needle to sew their mouths shut at the Ponte Galeria facility on Saturday.

One of the four was due to be repatriated to his home country on Monday.

"Their revolt requires us to reopen the national debate on these inhumane centres and on a legislation that takes in those fleeing war, violence and poverty," said Rome mayor Ignazio Marino.

How to deal with the growing number of immigrants is a controversial issue in Italy.

More than 33,000 migrants had landed in Italy as of late October — nearly three times more than the number for 2012. Most come from impoverished African countries but now also from Syria.

The latest incident comes just days after Brussels condemned the "appalling" conditions at some of the country's migrant centres, following the release of footage of naked asylum-seekers being hosed down at a facility on the island of Lampedusa.

Lampedusa hit the headlines in October when a boat laden with migrants caught fire and capsized within sight of the shore, leaving 366 dead in the worst Mediterranean migrant tragedy yet.