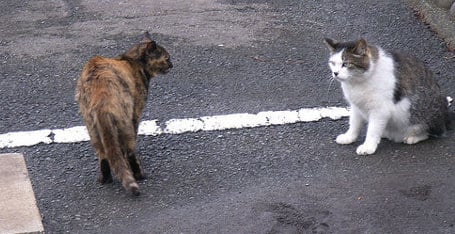 Lieutenant Barbara Balanzoni, a medical officer who served at the Nato base in Kosovo, is accused of "gross insubordination" after violating a written order not to "approach or be approached by wild, stray or unaccompanied animals".

Lt Balanzoni, who has since returned to her home in Tuscany, rushed to the rescue of the stray cat in May 2012 after army staff raised concern about noises it was making. She intervened after the staff failed to reach the army veterinary officer, who was in Italy at the time.

The cat, later called Agata, gave birth in an army pavillion but got into difficulties with the final, stillborn kitten.

Lt Balanzoni told the UK's Guardian newspaper: “Far from disobeying orders, I was following military regulations, which state that, in the absence of a vet, the medical officer should intervene…If the cat had died, the entire area would have had to be disinfected. What is more, the surviving kittens could not have been fed. So they too would have died and created an even greater public health problem."

In the process of saving the cat, Lt Balanzoni was bitten – something she told Corriere della Sera was "just a scratch" – and had to receive a rabies jab.

The prosecution argues that rather than preventing a public health problem, she could have caused one.

The trial is set to begin at the Military Tribunal in Rome on February 7th, with the matter expected to be raised in parliament before then.

Lt Balanzoni has returned to her civilian job as an anaesthetist, but told Corriere della Sera that her dream is to work again for the army, "an insitution I love…like cats."

"I'm living a nightmare," she added.

"I hope justice takes its course and that action will be taken against those who brought me from the base to the court."