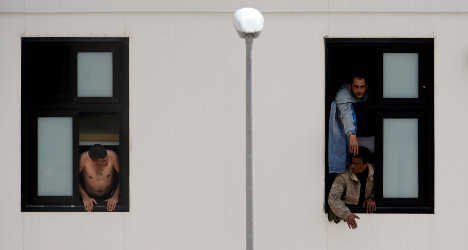 An Italian MP is staying at the Lampedusa migrant reception centre to monitor the conditions. Photo: Filippo Monteforte/AFP

Khalid Chaouki, a Democratic Party (PD) politician, arrived at the southern island’s immigration reception centre over the weekend and vowed to stay “as long as it takes to reinstate the law”.

“I came to check the conditions the people in the Lampedusa reception centre experience,” Chaouki said in a message on his Facebook page on Sunday.

The 30-year-old MP said he he had encountered “awful conditions in terms of hygiene”.

“Not all the bathrooms work, the water supply is leaking into the rooms where people sleep. They’re completely flooded and there are filthy mattresses stacked up.”

Chaouki said the centre, which was built for 250 people but currently houses 600, is without a canteen and so people eat on their beds. Six people are on hunger strike, he added.

“We are in an illegal situation. The immigrants are imprisoned in the centre. They are not allowed to leave, even though this should only be a welcome centre, not a prison,” he said.

Chaouki’s decision to move into the Lampedusa centre comes just days after a Syrian filmed fellow migrants stripping before being hosed down to be disinfected for scabies they had picked up since arriving on the island.

The footage, shown by Italian broadcaster Rai, prompted the EU to launch an investigation into the way migrants are treated in the centre. A probe was also initiated by the Italian government and the management staff of the Lampedusa centre were promptly fired.

One of the southernmost points of Europe, the island has long been a target by people smugglers operating from the Libyan coast. By the end of October this year, 13,000 migrants had already arrived in Lampedusa on rickety boats, while hundreds drowned before reaching the island.

The fate of the migrants, many fleeing war-torn states or autocratic governments, came to international attention in October when more than 400 people drowned after two boats sank off the coast of Lampedusa.

Chaouki said that seven survivors from one of the shipwrecks were still in the immigration centre, intended as a place for migrants to stay for a short time after arrival

But the treatment of migrants in Italy is not only under the spotlight in Lampedusa. On Sunday, a group of migrants at a Rome immigration centre sewed their lips together to draw attention to their plight.

Rome Mayor Ignazio Marino said the protest “requires us to reopen the national debate on these inhumane centres”.