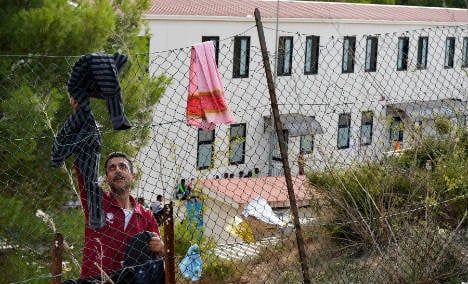 Nine migrants at an expulsion centre near Rome's airport have also sewn their mouths shut and a total of 37 are on hunger strike, said the director of the centre, Vincenzo Lutrelli, Italian media reported.

"I hope that this being Christmas Eve there will be an end to the protest," said Lutrelli, who has supported the initiative to draw attention to the long months in which migrants are held in prison-like conditions.

Prime Minister Enrico Letta on Monday said he would propose a partial reform of Italy's tough immigration laws next month, along with a plan to overhaul the asylum system after a major influx of migrants.

The interior ministry estimates some 42,000 migrants have landed in Italy this year — triple the number from 2012 — usually on fishing boats from north Africa.

Most of the latest arrivals are from Eritrea, Somalia and Syria but there are also migrants from Afghanistan, Egypt, Tunisia and many parts of sub-Saharan Africa.

Up to 600 migrants — mostly from Eritrea and Syria — drowned in two shipwrecks within days  off Lampedusa, Italy's southernmost territory.

Survivors of one of the shipwrecks are still being housed at the Lampedusa centre as they are witnesses in the criminal investigation into the shipwreck.

Out of the total of 200 migrants at the centre, 100 were flown out to the Italian mainland on Tuesday and another group was to be transferred later in the day.

Khalid Chaouki, a deputy from the centre-left Democratic Party, has staged a protest at the centre and says he intends to stay until all the migrants — including the shipwreck survivors — have been given better housing in other parts of Italy.

"This is a shameful place," said the Moroccan-born Chaouki, who has been living at the centre since Sunday.

Conditions at Lampedusa came under the spotlight this month when a secretly-shot video showing a queue of naked migrants being disinfected caused outrage.

There have been riots and protests at several centres across Italy since the scandal over the video broke.