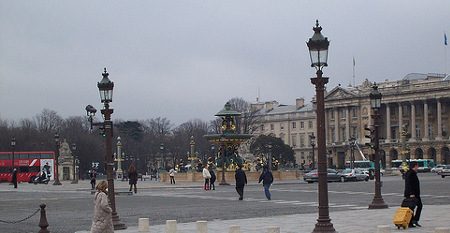 The Italian theatre manager rammed his car into the gates of France's presidential palace in protest against subsidy cuts. Photo: Haydn Blackey/Flickr

The action was seen as largely symbolic since Attilio Maggiulli "only succeeded in lightly hitting the grills at slow speed," a police source said.

"He was immediately arrested and placed in custody."

"If his aim was to be talked about, he has succeeded. But he may have to pay for that," a source close to the investigation said.

Other police sources said the 67-year-old, who runs a 100-seat theatre in the city's Montparnasse district, had staged another protest near the Elysee palace a few days ago, setting fire to a model of a harlequin.

He had scattered leaflets on the road slamming a cut in subsidies for his theatre, La Comedie Italienne, which stages classical and contemporary Italian works.

Maggiulli was briefly held for questioning by police following that incident.

A student of the well-known Italian opera and theatre director Giorgio Strehler, Maggiulli has a record of staging stunts to highlight his theatre's financial woes, including a hunger strike 10 years ago.