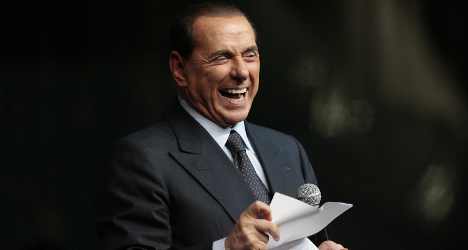 One of the thieves wore a Silvio Berlusconi mask. Photo: Emilio Andreoli/AFP

The two armed robbers raided the arcade in the city of Sassari on Christmas Eve morning, Rai News said.

The pair forced the owner to hand over the takings of around €5,000, before tying him up and making their escape. A customer raised the alarm and police are now on the hunt for the thieves, Rai News reported.

The robbery is not the first time the former prime minister’s face has been used for criminal means.

In 2009, thieves in the northern city of Turin attempted to rob a bank disguised as Berlusconi and his aide Marcello Dell'Utri, who has been convicted for his links to the mafia.

They may have taken inspiration from the 1991 film Point Break, in which a band of thieves rob a bank wearing masks of former US presidents.