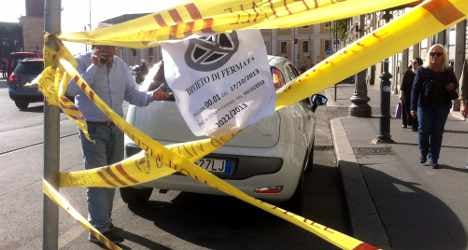 A car parked behind a "no stopping" notice by Rome police. Photo: Rosie Scammell/The Local

“The traffic police arm themselves with Twitter. Here come the first ‘social’ fines,” he said.

The social media savvy Clemente has been using his own account and that of the city police, which launched just a month ago, to track down people breaking traffic rules in Rome.

The move has received an enthusiastic response from Twitter users, who appear pleased to at last be able to channel their frustration at the state of the city’s streets.

While Romans may have a reputation for speeding around their city as if it were a racetrack, Twitter users appear more worried by their fellow citizens inability to park.

“Has the pedestrian area of Piazza Borghese gone on holiday? Indecent,” wrote one Twitter user, posting a photograph of the piazza overrun with parked cars.

Another posted a photograph (below) of cars parked over a pedestrian crossing, detailing the time and place.

When asked by a Rome councillor whether using social media to gather information was working, Clemente said he was “very interested in receiving recommendations from citizens”.

“But in case of an emergency, I recommend phoning” rather than tweeting, he said.