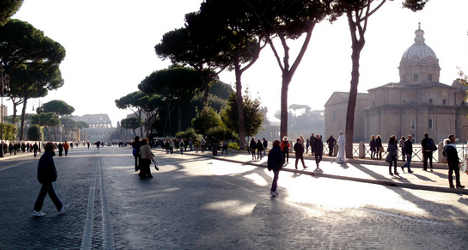 The tourist was followed down Via dei Fori Imperiali. Photo: Lorena Suárez/Flickr

The 39-year-old from Piedmont, north-western Italy, was walking down Via dei Fori Imperiali when he was followed by a group of men, Il Tempo reported on Sunday.

The tourist had taken a photograph of one of the many human statues lining the street, which cuts through the Roman forum, and walked on without leaving the customary tip.

He was quickly followed by five Bengali men, who surrounded and threatened him for payment, the newspaper said.

A police patrol passing by quickly intervened and arrested three of the men, aged between 17 and 20, while two others escaped through the crowds.

The trio have been accused of attempted extortion, Il Tempo said.