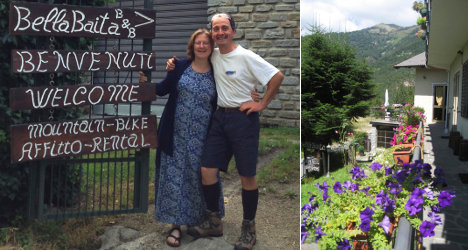 Gulley first came to Italy in 2001 to work as a pastry chef in Tuscany. Photos: Marla Gulley

How did you end up working in Italy?

I used to work for the British tour company Thomson Holidays in Colorado, where I've lived most of my adult life, running a chalet and ski-guiding. They were looking for staff to work in Europe so I ended up going back and forth for around four years to Slovenia, Austria, Greece and Switzerland.

Along the way, I met an American who was temporarily working for Thomson and kept talking about another job she had in Tuscany as a chef for an English art school. This really interested me because I'd worked as a pastry chef originally for many years and was looking for a change.

Two years later, she called me and said she was leaving her job. I managed to get hired in her place in 2001, moved to a small town in Tuscany, called Casole d'Elsa, between Siena and San Gimignano where I worked for two summer seasons.

There were only three streets and two bars in the whole town, so it didn’t take long to meet people. In fact, that’s where I met my husband Fabrizio, who was working as a maitre d' in an agriturismo at the time.

Now you own and run a bed and breakfast in the Italian Alps. How did that come about?

While we were working in Tuscany, Fabrizio kept talking about his family business. His parents had built and then run a mountain restaurant, La Baita, for almost 40 years before retiring and renting out the restaurant portion of the building to other people.

We knew that the Winter Olympics would be hosted in the area in 2006, so we moved up there in 2003 and took over his parent’s portion of the building. We created a bed and breakfast in the rooms that had never been used as an inn, and named it Bella Baita B&B. As a bed and breakfast we couldn’t really serve any food apart from breakfast.

Given that my husband is also a chef, it seemed a good idea to start doing other meals as well, especially as the restaurant business that was rented in the oldest part of the building decided to close down after changing hands a few times.

Then we started an association called TEM (Touristic Ecosostenibile Montano), which helps to promote ecologically sustainable tourism and to support and preserve mountain culture and cuisine through meals and cookery classes. That’s now our main focus.

Eventually, we took over the large family garden, which we use to grow much of our own fruit and vegetables. We hope to add some chickens and goats, but right now we have our hands full.

Was it easy to integrate as an outsider?

I live out of town up in the mountains, so it’s somewhat isolated. But I’m married to an Italian who knows everyone and speaks the local dialect. So no-one is a stranger here for long!

During the Olympics, we helped a lot of people sort out home stays which I think got my foot in the door. A lot of people appreciated being able to meet the Olympians’ families. For me, that’s when the ice really broke and I felt more connected to the community.

What kind of food do you make?

It’s mostly regional food from Piedmont. We dip into other regional Italian food but we try to stay as local as possible. Piedmont is famous for its variety of cow and goat cheeses such as Toma, Robiola, and Caprino.

Piedmont meats are well regarded and very popular made into various rolls for roasting or pan cooking.

You also offer volunteering opportunities for travellers. How does this work?

For the past two years, we’ve been taking on WWOOFers (volunteers for Worldwide Opportunities on Organic Farms) – who volunteer to help out with garden and farm work.

We’re also are a member of Workaway, a similar association through which volunteers also offer help gardening and other work services other than farming. Both types of volunteers receive lodging and board for their help.

They become part of our family and it is a great cultural exchange. We have all sorts of nationalities volunteering including Italian, English, American, Dutch, Chinese, and French. Sometimes they'll cook and share some of their specialities with us, which is wonderful.

Do you see yourself moving back to the US in the future?

I love it here and it feels like home – so I don’t see myself going back. Although Fabrizio loves the US, he would miss the quality and diversity of Italy's food and so would I.

Back in Colorado, we don’t have as much fresh produce or traditional foods from local producers. It may be catching on now, but it’s not as pervasive as here. We would both miss the food market culture here, where every little town has their own weekly market day where both the food and the people are outstanding.