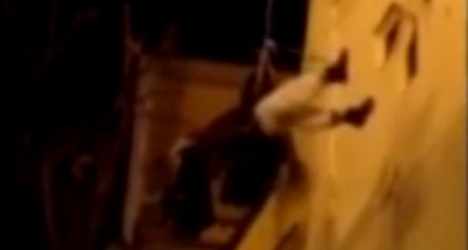 The fireman fell against the cathedral during Befana celebrations. Screenshot: MattoMondo/YouTube

Salvatore Alfano was performing the tradition of giving sweets to children, waiting in the crowds below, when his support wire unfastened and he fell against the cathedral’s bell tower, Corriere del Mezzogiorno reported.

A video of the accident (below) on Sunday evening shows Alfano’s lifeless body suspended above Piazza Duomo, knocking against the cathedral, before he is lowered to the ground.

The fireman was immediately taken to hospital where he underwent an operation for a head injury, Corriere said.

“During these difficult hours we must all come together to be around Salvatore Alfano,” Domenico Zinzi, president of the province, was quoted in the newspaper as saying.

Watch a video of the Befana accident: