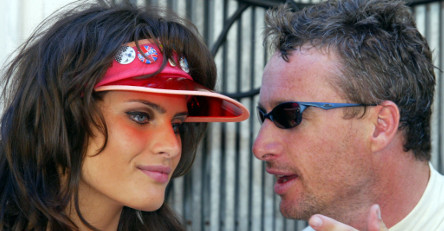 Irvine, from Northern Ireland, got into a brawl with Gabrielle Moratti, the son of a former Milan mayor, after reportedly sending a text to the Italian’s ex-girlfriend, Corriere reported.

The pair, who blamed eachother for the 2008 dispute at Hollywood, an upmarket Milan nightclub, were both found guilty of “mutual injury”.

Both Irvine, 48, and Moratti had accused the other of provoking the fight.

Moratti claimed: “He threw a glass in my face and I still have scars above my eye,” while Irvine said Moratti punched him “two or three” times as he sat chatting to a woman in the club’s VIP area.

"He hit me from behind. I lost my balance and I fell to the floor. Someone tried to restrain Moratti,” he said.

Corriere reported that the row broke out after Irvine sent a text message to Moratti’s former girlfriend, named by the newspaper as Giorgia.

But this version of events was disputed by Moratti’s lawyer, Vincenzo Saponara, who told the news agency Reuters: “It’s a nice story. But in reality that’s not the case”.

Saponara added that the sentence was likely to be suspended and that neither man whould go to prison.