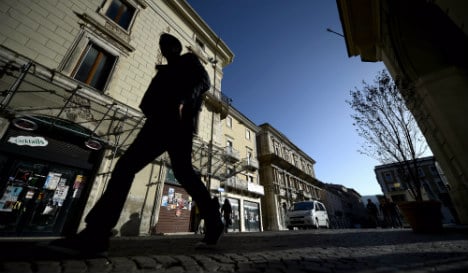 "I have no legitimacy left. I am tired. I am angry. I have suffered a full-on media attack. That is why I am resigning," Massimo Cialente told reporters.

"I have understood that I am no longer useful in this town and I am maybe even an obstacle," he added.

Four people from his administration were placed under house arrest Wednesday for alleged bribery linked to reconstruction contracts following the earthquake in the central Italian town.

Four more have been notified they are under investigation, including deputy mayor Roberto Riga and a local official in charge of restoring damaged monuments.

Police said the eight people under investigation received a total of €500,000 ($680,000) in kickbacks from construction firms.

They are also accused of falsifying papers to receive €1.2 million in public funds and one is suspected of profiting from the sale of post-quake housing.

L'Aquila and the surrounding area in the Apennine mountains were devastated by the earthquake measuring 6.3 on the Richter scale and many buildings in the city centre still lie in ruins, with few signs of the hundreds of millions of euros spent on reconstruction.