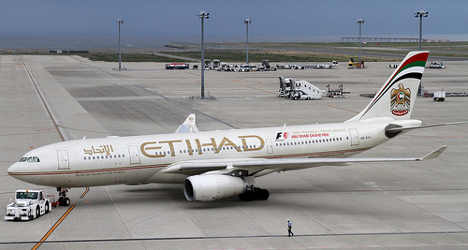 Last month Etihad confirmed that it was in talks with Alitalia. Photo: Kentaro IEMOTO/Flickr

"It's early days. We are working through the process," Hogan told a news conference hosted by Etihad's German partner Air Berlin.

It was "very premature" to discuss the size of any shareholding to be bought by Etihad, he continued, adding that he had "no plan to make any announcement at the end of this month."

Last month, Etihad confirmed that it was in talks with Alitalia.

Reports have suggested that the Abu Dhabi-based carrier is preparing a big investment in Alitalia, which is in debt to the tune of €1.2 billion.

In October, shareholders gave unanimous approval for a capital increase of up to €300 million to save Alitalia from bankruptcy.

The carrier has been looking for a foreign partner to rescue it.

Etihad is expanding rapidly and has bought minor shares in several smaller carriers around the world as it competes with larger Gulf rivals Emirates and Qatar Airways.

The acquisition is awaiting regulatory approval.

Etihad is also due to acquire 49 percent of Air Serbia in January.