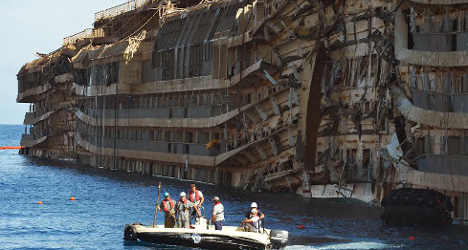 A few dozen protesters rallied in Grosseto in Tuscany, near the courtroom where Schettino is on trial for manslaughter and allegedly abandoning the ship before all the passengers had been evacuated.

"There is a lack of security on these ships. This trial is showing that the emergency systems that should have guaranteed passenger safety did not work," Massimiliano Gabrielli, a lawyer representing some of the survivors, was quoted by the ANSA news agency as saying.

Schettino, who was not present at Monday's hearing in Grosseto, said that he felt "an immense pain" over the disaster, for which he blamed his crew.

"I only regret having officers under my command who were not up to standard. Steering a ship is not like driving a car, and the captain only works alone for the manoeuvres of entering and leaving the port. During the rest of the navigation, it's the other officials who are in charge of steering the ship,” he told French newspaper Le Figaro.

The captain is the only person on trial for the wreck. Five others – four crew members and Roberto Ferrarini, the head of Costa Crociere's crisis unit – have negotiated plea bargains of up to 34 months in prison.

Costa Crociere, Europe's biggest cruise operator, has accepted limited responsibility as the employer of Schettino and the convicted crew members and has been ordered to pay a fine of one million euros.

Schettino said the shipbuilders should also take the blame for the disaster. “How you can condemn a person who has suffered a shipwreck? And why not the person who build a ship with watertight doors which didn't work?”

The island of Giglio, where the giant ship crashed on the night of January 13th 2012, held a commemorative mass, and the sirens of local fishing boats will be sounded at the exact time of the impact at 2045 GMT.

The Costa Concordia struck rocks just off the shore as it steered close to the coast in a risky salute manoeuvre with 4,229 people from 70 countries on board.

The wreck, which was turned upright in September, is to be re-floated and towed away by June in the biggest salvage operation of a passenger ship ever attempted.