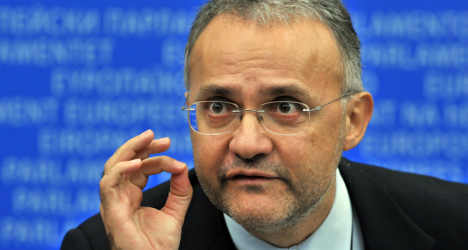 Defence Minister Mario Mauro made the comments during a visit to the US. Photo: Georges Gobet/AFP

"We are deeply worried about the situation in Libya where the government is struggling to establish its authority over the militias that fought against the previous regime," Mauro said at an event at Johns Hopkins University.

Italy, the United States, Britain and Turkey have committed to help build up Libyan security forces to help Tripoli ensure security and control its borders.

While the Arab Spring had brought hope and "renewal," upheaval in Libya, Egypt and Syria carried an impact on European Union countries.

"Europe enjoys domestic security but we are surrounded by conflict areas that require the international community's attention and intervention," he said.

Mauro spoke after holding talks with his US counterpart, Chuck Hagel, at the Pentagon, where the two discussed the violence in Libya, Syria's civil war and other issues, officials said.

In the meeting, the Pentagon chief cited Rome's training of Libyan forces and "praised Italy's contributions to capacity building in emerging democracies in the Middle East and North Africa," according to a statement from Hagel's spokesman, Rear Admiral John Kirby.

The talks touched on Afghanistan, where Italy has committed to contributing to a smaller force in the country's western region after 2014.

The bulk of NATO troops are due to withdraw from Afghanistan later this year but the United States and its allies have offered to retain a small contingent on the ground after 2014, pending the signature of a security agreement with Kabul.

The most dangerous chemical agents from Syria are due to be transported to an Italian port and later loaded onto a US ship, which will then neutralize the chemicals with special equipment.

The two defense chiefs also addressed Rome's role in the F-35 fighter program, according to the Pentagon.

Mauro acknowledged financial pressures and some opposition to the program back home but said "our interest in the F-35 program is strictly linked to the possibility to increase our knowledge" in technology and research.