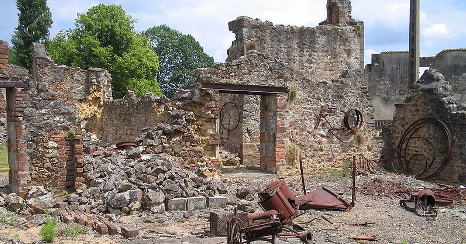 The French village of Oradour-sur-Glane has been a ghost town ever since the World War II tragedy. Photo: Dna-Dennis/Wikicommons

"The enquiry has just begun. It will not be easy, but we will do everything possible," prosecutor Marco de Paolis, who has convicted dozens of German war criminals in the past, told Ansa news agency.

In June 1944, SS troops massacred most inhabitants of the tiny village of Oradour-sur-Glane in western France.

The male victims were mowed down with machine guns in a barn, with survivors shot at close range with pistols before the barn was set ablaze. The women and children were taken prisoner in the village church, which was also set on fire.

Among the victims were 254 women and 207 children – including Italian mother Lucia Zoccarato and seven of her nine children.

Zoccarato had emigrated to France along with her husband and children in 1927. At the time of their death, her husband Giuseppe Antonio Miozzo was being held prisoner in Germany for refusing to comply with the Nazi regime.

Last week, German prosecutors charged an 88-year-old former soldier with the group murder of 25 of the victims, and with aiding and abetting the murder of several hundred people.They said the suspect – who was not named – would have until the end of March to raise any objections to the case going to trial.

The attack was an act of retribution ordered over the purported kidnapping and murder of a commander.

The village has been a ghost town ever since the atrocity, deliberately preserved in its ravaged state as a memorial to those who died on one of the darkest days of World War II.