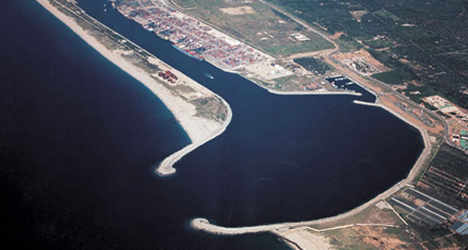 "The government has chosen the port of Gioia Tauro as particularly appropriate," Transport Minister Maurizio Lupi told lawmakers at a parliamentary hearing in Rome on the transloading of the chemicals in Italy.

The operation to transfer some 500 tonnes of Syria's deadliest chemicals from a Danish ship to a US vessel is part of a UN-backed plan to destroy the war-torn country's chemical weapons arsenal by June 30th.

Lupi said that an estimated 60 containers containing the chemicals, including mustard gas and the ingredients for the nerve agents sarin and VX, would be moved from one ship to the other using rolling cranes.

"There will be no stocking on land," Lupi said.

Ahmet Uzumcu, the head of the Organisation for the Prohibition of Chemical Weapons (OPCW), who was also at the hearing, said the operation would take place "in early February" and would last up to 48 hours.

"I wish to thank Italy for its generous contribution," he said.

The local mayor of Gioia Tauro in the impoverished Calabria region in southern Italy, which is one of the biggest container ports in Europe and moves around three million containers a year, slammed the decision.

"We will oppose this move by all legal means," Renato Bellofiore was quoted as saying by the Italian news agency ANSA immediately after the announcement.

"They are putting my life at risk. If anything happens, people will come and get me with pitchforks," he said, adding: "We are considered second-class citizens."

Uzumcu meanwhile said a deadline for destroying the deadliest chemicals by March 31st may not be met but said he was confident the entire arsenal would be decommissioned by June 30th in line with the UN plan.

The official voiced particular concern about unconfirmed reports from the Syrian regime of opposition attacks on two chemical facilities in Syria.

"It would be worrying if there are attempts to capture those chemicals. I don't think it's in the interests of anyone," he said during his visit to Rome.

He also said that negotiations with different sides for the transit of the chemical convoys to the Syrian port of Latakia for loading were "challenging".

Syria has now requested extra equipment, including armoured vehicles, to escort the convoys and Uzumcu said "most" of their demands would be met.

"We are meeting with the Syrian authorities to speed up the process," he said.

"The international community should seize this opportunity to extend this consensus to other areas," Uzumcu said, speaking ahead of long-delayed Syria peace talks dubbed Geneva II due to start on January 22nd.

A Danish cargo ship, the Ark Futura, earlier this month took a first cargo of materials from Latakia and is now back in international waters under military protection, awaiting a return to pick up the remainder.

Uzumcu said the initial load was "a little more than 16 tonnes" and once the ship is fully loaded the plan is to sail to Italy with Danish and Norwegian warships.

In Italy, the chemicals will be transferred onto the US ship MV Cape Ray, which will destroy them at sea – to avoid risks to civilian areas – over a period of up to three months using mobile hydrolysis equipment.

The chemicals, which are only weapons if mixed and fitted on munitions, will be combined with neutralising agents and the hazardous waste generated will be stored on the ship and then disposed of commercially.

The operation could take as little as 45 days if the weather is calm but is expected to last 90 days.

UN Security Council resolution 2118 was passed after a massive chemical weapon attack that killed hundreds in several opposition areas around Damascus in August. Rebels and the regime exchanged blame for that attack.