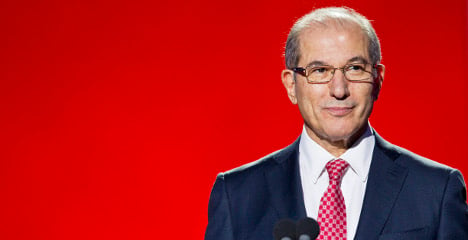 Ahmet Uzumcu, head of the OPCW, will on Thursday announce the Italian port through which Syria's chemicals will transit. Photo: Vegard Grott/AFP

Ahmet Uzumcu, director general of the Hague-based Organisation for the Prohibition of Chemical Weapons (OPCW), will address Italy's parliament to name the port where the chemicals will initially be taken.

A Danish ship this month took a first cargo of the most dangerous materials from the Syrian port of Latakia and is now back in international waters, awaiting a return to pick up more chemicals under the United Nations plan.

Once the ship has loaded some 500 tonnes of the deadliest compounds, the plan is that it will cross the Mediterranean to Italy, with maritime security provided by various countries including China and Russia.

In an Italian port, the chemicals will then be transferred onto a US ship, the MV Cape Ray, which will destroy them at sea over a period of up to three months using specially-built mobile hydrolysis equipment.

The MV Cape Ray is still in port in the United States and is expected to set off later this week or early next week for the two-week voyage to Italy.

The US military, which will neutralise the chemicals, said in a statement that materials will include those used to make mustard gas and the nerve agents sarin and VX.

The chemicals, which are only weapons if mixed and fitted on munitions, will be combined with neutralising agents and the hazardous waste generated will be stored on the ship and then disposed of commercially.

The operation could take as little as 45 days if the weather is calm but is expected to last 90 days.

The plan is to carry it out in international waters to exclude potential harm to civilian populations.

The trans-loading has generated local opposition in Italy in the areas that have been named in the local press as possible choices for the delicate operation.

Ugo Cappellacci, the governor of Sardinia, has said he does not want his island to be "Italy's waste bin".

"We are absolutely opposed to the transit of Syrian chemical arms through Sardinia," he said on Wednesday.

Ports in the regions of Calabria, Puglia and Sicily in southern Italy have also been mentioned.

Under the UN plan, all of Syria's declared 1,290 tonne arsenal should be destroyed by June 30.

But the country's worsening conflict has caused holdups.