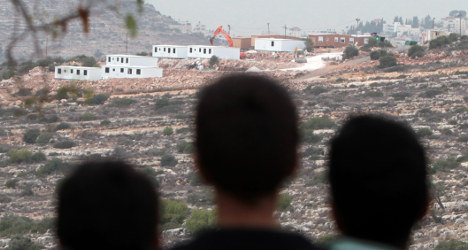 Palestinian children look a bungalows built by Israeli settlers at an outpost constructed on seized land, near the West Bank city of Birzeit in December. File photo: Abbas Momani/AFP

Israel's Foreign Ministry reacted to the news by also summoning the ambassadors of all four EU countries on Friday, labelling their governments' "perpetual one-sided stance" unacceptable.

"The EU calls our ambassadors in because of the construction of a few houses?" said Israeli Prime Minister Benjamin Netanyahu in a press conference on Thursday.

"When did the EU call in the Palestinian ambassadors about incitement that calls for Israel's destruction?"

"(It's) an obstacle to peace and threatens to make the two-state solution impossible," the BBC reported Ashton as saying.

But President Netanyahu said it was "time to stop this hypocrisy" and "inject some balance and fairness to this discussion".

"This imbalance and this bias against Israel doesn't advance peace," he argued.

Around half a million Jewish citizens of Israel live in more than 100 settlements built after Israel occupied the West Bank and East Jerusalem in 1967.

The settlements are considered illegal under international law, though Israel disputes this.