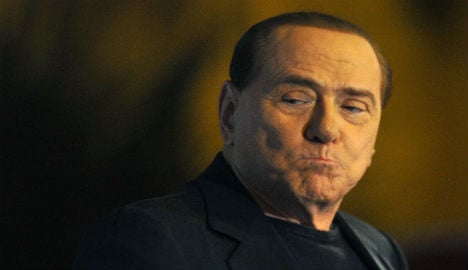 "Shame!" and "No negotiations with criminals!" a group of a few dozen protesters shouted as the disgraced former prime minister's car arrived for the meeting with Matteo Renzi at Democratic Party headquarters.

Protesters pelted the car with eggs as it passed and one man held up a sign with a picture of Berlusconi behind bars saying: "This is how we want him".

Police lines kept the protesters away from the building.

Berlusconi was expelled from the Italian parliament last year over his conviction for tax fraud and is due to serve a year of house arrest or community service. He has also been found guilty of having sex with an underage 17-year-old prostitute while he was prime minister and abusing the powers of his office.

Renzi was picked last year to lead the Democratic Party and says he wants to meet Berlusconi to find a deal on reforming Italy's electoral law, which was blamed for an inconclusive result in the 2013 general election.

Italian Prime Minister Enrico Letta, also from the Democratic Party, was appointed earlier this year as a compromise choice to end a two-month deadlock
following elections that were only very narrowly won by the party.

Renzi said after the meeting that he had found "a deep harmony" with Berlusconi on the types of political reforms to be undertaken and that the party's leadership would vote on a draft of the text on Monday.

Also the mayor of Florence, Renzi already incurred leftist wrath in 2010 before becoming party leader when he went to Berlusconi's luxury residence near Milan.

His latest overture has been heavily criticised within the party, which has campaigned for years against Berlusconi and where a coalition deal with the billionaire tycoon after the elections sparked outrage.

Berlusconi has since pulled his party Forza Italia (Go Italy) out of the ruling coalition and into opposition, while a breakaway group led by his former protege Angelino Alfano has stayed on in government.