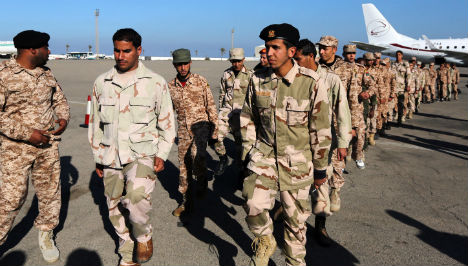 A batch of former rebels who have joined the ranks of the Libyan army board a plane in the capital Tripoli heading to Italy. AFP Photo/Mahmud Turkia

Some of them are former rebels who fought to oust Qaddafi as part of ragtag opposition forces and the training is taking place at an Italian army base in Cassino, 100 kilometres (62 miles) south of Rome.

In one part of the base a soldier could be seen applying camouflage face paint, while in another soldiers trained on monkey bars and obstacle courses.

An imam in army fatigues calls the soldiers to prayer in a special room fitted out for the purpose and the menus at the canteen have been changed to halal.

The new soldiers "support a free Libya", Lieutenant General Claudio Graziano, chief of staff of the Italian army, said Saturday during a visit to the base — near the site of the famous World War II battle of Monte Cassino.

"A strong army will become a reference point for democracy and security," Graziano told a small group of reporters, as the 341 mostly young infantrymen
around him got trained on weapons handling and camouflage.

Britain, Turkey and the United States are all taking part in the initiative to train up a total of 15,000 troops but Graziano said that Italy — Libya's former colonial master — was "taking the lead".

Two thousand Libyan soldiers — most of them from Benghazi, Misrata and Tripoli — will be trained in Italy and the first group arrived on January 10.

"We are learning to train together, to be one entity. It's very important for us to learn how to stay united," said one soldier from Libya, where there have been deep tensions between different cities and regions.

One of the Italian trainers is Captain Francesca Giardulli, who went on an intensive six-month language course, and shouted out her orders in Arabic.

"These are young civilians with no experience in the military and so we really have to train them as if they were newbies," Giardulli told AFP.

Graziano said some of the soldiers fought in the rebellion but others had no experience of combat.

"None of them were in Colonel Kadhafi's army," he said.

Colonel Mohammed Badi leads the Libyan contingent and one of 34 officers and sub-officers in the first group.

"Our mission is the same as it is for all the armies in the world, to guard our borders and to ensure protection and security for our population, as well as collaborating with other countries," he said.

Graziano, a former head of the United Nations monitoring force in Lebanon, UNIFIL, and a commander in Afghanistan, said this type of co-operation was "a
cultural challenge, but it's nothing new for us".