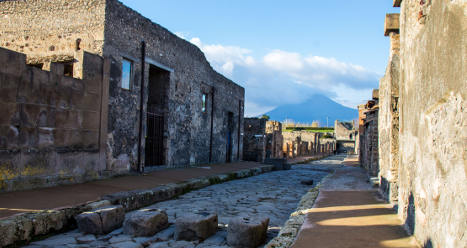 Last year, UNESCO threatened Italy with removing the prestigious World Heritage status from Pompeii, as walls fell around the country’s most famous ancient site. The move reflected broader international concern that Italy, struggling in the depths of an ongoing recession, had abandoned its world-renowned heritage.

Reports on Monday also revealed that the Italian government is planning even deeper cutbacks on its prized heritage.

But while the spending parts are a concern, experts tell The Local there are broader issues at play.

These include the way work gets done in Italy, with companies cutting corners to win bids on restoration work and the government failing to pay its staff and contractors for months on end.

Those who do have money to spend on Italian heritage – including philanthropists and international organizations – often face bureaucratic hurdles which mean those that do persevere must wait years to get anything done.

“I don’t think we can attribute everything to the recession; the recession has made a bad situation worse,” says Andrew Wallace-Hadrill, a former director of the British School at Rome, one of the capital's archaeological academies.

Despite having more sites on the World Heritage list than any other country – 49, ahead of China’s 45 – Wallace-Hadrill says there has been “an historical underfunding of heritage” in Italy.

But whereas sites across the country may be suffering from budget cuts, the same cannot be said of Pompeii, the city wiped out by a volcano in 74AD, which saw a €105 million conservation project get underway last February.

SEE ALSO: 'Pompeii needs an archaeologist at the top'

Yet still the walls fall down – the result of outsourcing precious maintenance work to underskilled builders, according to Wallace-Hadrill. While outsourcing is not a bad thing in principle, he says the current way it is done “is not fit for purpose”.

“They say, ‘This particular house is in a terrible state, let’s do a big project on this house’. They put it out to tender, then companies under-bid each other,” Wallace-Hadrill adds.

Not only does this lead to cutting corners, but the whole process takes years and leads to future damage on site.

If outsourcing is necessary, contracts should be given for continuous maintenance rather than only after something goes wrong. Wallace-Hadrill’s view is echoed by Darius Arya, CEO of the Amer­i­can Insti­tute for Roman Cul­ture.

“When a disaster happens, such as a wall collapsing, the money is there. But if you spend a little bit of money consistently, then you won’t get to those disasters. It continues to be badly run,” he tells The Local.

The Colosseum can be seen as a prime example of how poor management and bureaucracy can burden Italy’s ancient sites.

Work finally began on the Rome amphitheatre in September, three years after Diego Della Valle, owner of Tod’s shoes, announced a €25 million donation for its restoration.

“They set up a bidding war; both builders and conservationists wanted to do the work. Then there were court cases and appeals and now finally the work is ready to go,” adds Arya.

While the Tod’s investment “can do a great thing in Italy”, Arya says there are better ways to channel corporate investment into heritage.

“[The American Institute] is set up as an educational organization, so I don’t have bidding wars. If I do a project and get money from McDonald’s, for example, they give the money to us as a non-profit organization and we don’t have to worry about hold ups like those at the Colosseum,” he explains.

While applauding Italy’s attempt to find alternative sources of funding, Wallace-Hadrill is sceptical of corporate sponsorship, asking: “Can you trust a commercial sponsor to act in the interests of heritage of the public in general. as opposed to its own interests?”

Della Valle’s money would have been better channeled through a foundation, in the same way funds are directed through the Bill & Melinda Gates Foundation rather than the billionaires’ company Microsoft, Wallace-Hadrill adds.

Additionally, the government should grant tax incentives for such donations. “Don’t charge VAT on work done by philanthropic sponsorship [and] if the sponsor is an Italian taxpayer, allow them to discount the philanthropy from their tax bill,” he says.

While wealthy donors are valuable, Arya argues that there should also be more opportunities for individual visitors to contribute.

“If you go to the UK or the US, it’s very clear that you can contribute money right there and you feel confident about where it’s going. Show great projects that are successful and promote them; give more of a say to the visitor,” he says.

Italy should also be harnessing mobile technology for on-the-spot donations and give museums the option of crowdfunding to fund particular projects, he adds.

In order to save Italy’s ancient sites, the government must also pay more attention to their modern-day workers. “The typical situation is that people do something for the government and get paid weeks or months later. You’ve got to pay the employees and the contractors have to get paid too,” Arya says.

Such delays in paying salaries and getting work underway has led to the workforce's “growing sense of complete despair” according to Wallace-Hadrill.

“[It’s] despair about the way the system of government has let them down,” he says, citing Pompeii as a case in point: “Government after government has sent in the fire engines to Pompeii, rather than taking a measured long-term look.”

From badly-organized bids to mismanaging money, Italy needs a new approach to make the most out of its world-renowned heritage. “Fewer fire engines, more support,” says Wallace-Hadrill.

CRIME
US tourists fined €800 for breaking into Rome’s Colosseum to drink beer
Url copied to clipboard!