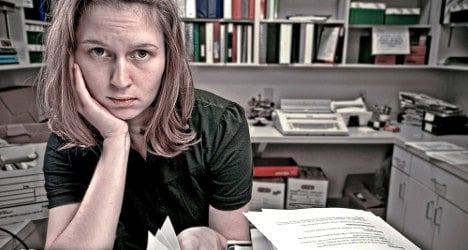 According to official statistics, just one in ten out of the 500,000 interns in Italy every year end up with a job. Photo: Joshua Hoffman

How important are internships in Italy?

“Internships are as important here as in other European countries,” says Voltolina. “However, in Italy, there’s only a very small chance that an internship will lead to a job.

"According to official statistics, just one in ten out of the 500,000 interns in Italy every year end up with a job."

Is speaking English an advantage?

“The bigger the company, the more important it is that you speak English – especially in big multinationals,” she says. “But of course it depends on your position. In general, though, knowledge of English is always an advantage.”

Is speaking Italian a necessity?

Definitely, according to Voltolina – with very few exceptions.

“Italians do not have a great reputation for speaking other languages – especially the over-40s,” she says. “It’s not like you’re in Denmark.”

Do you have to be enrolled at a university to qualify for an internship?

“The legislation isn’t clear, and it depends which region you are living in,” explains Voltolina.

“But if you’re enrolled at a university, then you will have more of a chance. As an outsider, it can be very difficult to get all the necessary documentation, especially if you don’t have a residence permit.”

Once you’ve left university, it becomes harder to find an internship, she says. “In many cases, people graduate from prestigious universities like Bocconi [business school] and then have a lot of difficulty finding an internship because they’re no longer students.”

If you’re no longer a student, you need to find a “host” institution (ente promotore). This could be a service such as Sportellostage or a job centre (centro per l'impiego).

Where can you look for internships?

Platforms such as Repubblica degli stagisti regularly publish adverts for internships, as do agencies such as Sportellostage (mentioned above). Jobsoul is a popular resource for students.

“If you look on the website of any large Italian company, you’ll find a ‘Lavora con noi’ (Work for us) section, where you can upload your CV.”

But foreigners should expect some differences in the way jobs are advertised, she warns.

“One difference in Italy, which foreigners may find strange, is that Italian job ads are often lacking in much detail,” says Voltolina. “So, in some cases, you don’t always know from the advert what the position is – or even the name of the company.”

To make matters worse, she says, many positions are not actually advertised at all but simply passed on through word of mouth.

“It’s typical in Italy to ask a friend for advice, who will then introduce you to someone,” she says.

Any pitfalls for unsuspecting interns?

It may be frustrating for graduates to have to carry out menial tasks such as photocopying or updating a database, but you shouldn’t immediately complain that you’re being exploited, warns the Repubblica degli stagisti on its website.

“It’s normal in the course of an internship to perform so-called ‘low-profile’ tasks,” the website says. “The problem arises when these tasks become the sole activity of the intern. In short, the promises of the training project are not being met, and the young person finds himself/herself doing [the work of a] secretary, clerk or assistant but without contract or salary.”

If you do find that you’re being exploited in this way, then you can apply for help to the inspectors at the nearest Provincial Labour Directorate (Direzione provinciale del lavoro) and ask for an audit to be carried out.

Also bear in mind that the proportion of interns in a company should never exceed 10 per cent of the number of employees on permanent contracts. For more information (in Italian), click here.

The Repubblica degli stagisti has also published a charter of interns’ rights on its website, also in Italian here.

What happens after an internship finishes?

Stay in contact with the company you were working for, and make sure you ask for feedback. You should also get a letter of recommendation.

But don’t get your hopes up, Voltolina warns.

“Even if you’re brilliant, you shouldn’t expect your phone to start ringing the moment you finish an internship.”

How much should you expect to get paid?

“Historically, internships are very badly paid in Italy,” says Voltolina. “In the past year, new rules have been introduced for all regions in which extracurricular internships (which do not form part of a university course), must pay at least €300 a month. This has been modified by some regions, some of which pay €400.”

How long do internships last?

“If an internship is part of a university course, then they tend to be shorter – between three weeks and six months,” says Voltolina.

Eleonora Voltolina is the editor of Repubblica degli stagisti, an organization which offers guidance for interns in Italy. She is also the author of Come non farsi sfruttare (How not to get exploited) and Se potessi avere 1,000 euro al mese (If you had 1,000 euros a month).