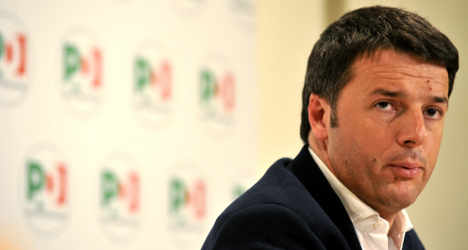 The court said in December that elections under the current system are unfair because voters have to choose from a fixed list of candidates, rather than between individual politicians.

In addition, the constitutional court criticized the bonus awarded to the leading coalition to grant it a majority number of seats.

The announcement coincided with Renzi’s election as the Democratic Party’s (PD) new leader, and the Florence mayor has wasted no time in getting his proposal on the table.

Over the weekend Renzi met with Silvio Berlusconi, leader of Italy’s second-largest party, Forza Italia, to iron out his plan for a new election law. Having gained approval from PD politicians, the new election law must go through parliament before it can be implemented.

Renzi’s plan includes a bonus of up to 18 percent, offered to the winning party or coalition that receives at least 35 percent of the vote. Smaller parties will only be given seats in parliament if they win at least eight percent of the vote, or five percent within a coalition.

The proposed system aims to avoid the paralysis which struck Italian politics after last year’s national election, in which three groups each won around a quarter of the vote, and rid the political system of the huge number of smaller parties.

After the two-month political stalemate that followed the 2013 elections, Renzi’s proposals have been greeted as a positive change.

Elections are a 'cultural issue'

“The current electoral system tends to create instability which, beyond the fact that it is hard to win a majority, over-emphasizes the influence and representation of smaller parties,” Alberto Nardelli, co-founder of election website, electionista, tells The Local.

While concerns have been raised that the threshold for seats in parliament could be a threat to small parties, Nardelli argues the change could prompt politicians to be more open to compromises within their own parties.

“We’re not talking about historical parties that have existed for 50 years; they are mainly parties which have sprung up between elections. Politicians argue and say they’ll create new parties,” he says.

This happens mainly because the existing electoral system allows politicians to wield greater influence as smaller spin-off parties than as minority voices within a larger party, Nardelli adds.

Paolo Bellucci, a professor at the University of Siena's Centre for the Study of Political Change (CIRCap), agrees that “the main purpose of this new law is to reduce fragmentation”.

He argues that the thresholds were set at five and eight percent for the benefit of the Deputy Prime Minister Angelino Alfano, who recently broke away from Berlusconi’s party to create his own political group.

“The threshold answers the needs of Alfano’s New Centre-Right (NCD),” Bellucci tells The Local. This week a poll put the NCD polling at 6.4 percent, behind the PD, Forza Italia and Beppe Grillo’s Five Star Movement (M5S).

Renzi’s proposals have not, however, done away with the closed lists of candidates, criticized by Italy’s Constitutional Court. But Bellucci argues that the criticism itself is controversial, as “most European systems have closed lists”.

The PD leader has instead improved the lists by revamping the way they are structured, Bellucci adds: “The new system allows voters to select from a list of four of five people, so voters can know the candidates they are going to select.”

For Nardelli, the problem of blocked lists stems from Italy’s political culture rather than the structure of the current law. “The problem with the lists is that parties would impose candidates that perhaps weren’t worthy – those that were owed favours – which was made possible by blocked lists.

“This is less of a technical and more of a cultural issue,” he says.

A higher calibre of candidates is needed in the first place, Nardelli says, which could be achieved by introducing primary elections for candidates.

The revised electoral law could be improved further by adopting the French system, Bellucci adds.

“In the first round each party can present a candidate, even a small party. If no-one gets the majority then there’s another round with only the parties that win more than 12.5 percent," he explains.

"This would allow each party to run on its own then create alliances in the second round."

But in the absence of a perfect election law, Bellucci says that overall Renzi’ proposals, if adopted, “will definitely be a positive change”.

Nardelli agrees that the plan is a step in the right direction, although cautions that it will take more than a new law to overhaul Italian politics.

“On paper, it makes the system much more efficient. But the cultural change will take a long time; we’ve had a poor choice for 20 years and it’s got worse.

“Having a stable starting point is a positive step in the right direction,” he says.