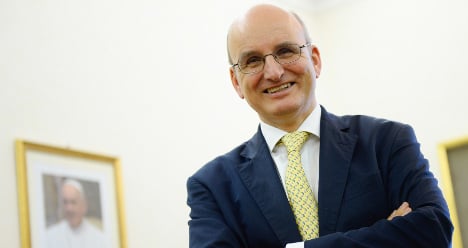 Ernst von Freyberg, who was appointed president of the bank, formally known as the Institute for Works of Religion (IOR), early last year said in a statement that “significant progress” had been made on overhauling the bank’s system in the wake of a series of money-laundering allegations.

“As an institute of the Church, we have a particular responsibility to live up to the high standards that are rightly expected of us,” he added.

“We have been working very hard to improve compliance, transparency and the processes inside the institute, and whilst there is still a lot of implementation work ahead of us, there is no doubt that we are on the right track and have made significant process.”

Ernst & Young, the global consultancy firm, began a review of the Vatican’s finance in November aftr Pope Francis called for an overhaul.

The bank, established in 1942, failed to meet international transparency standards intended to fight money-laundering, according to a report in 2012 by Moneyval, a European anti-money laundering body.

The revamp has so far included a forensic review of "unusual transactions" and a vetting of the bank’s customers. The criteria for opening an account have been tightened, and customers must now be Catholic institutions, clerics, employees or former employees at the Vatican, or embassies and diplomats accredited to the Holy See.

Accounts held by others "are being terminated," the bank said. Screening of accounts is expected to take until mid 2014, "and will be
subject to an assessment in the course of a forthcoming inspection by the AIF" – the Vatican's financial authority.

An internal investigation was also carried out following the arrest of a senior cleric, Nunzio Scarano, over money-laundering allegations in June last year, with the findings submitted to the authorities, the bank said.

Scarano, a former Vatican accountant, was on Tuesday notified of fresh charges against him.

In October, the bank disclosed its annual report for the first time in its history as it sought to improve transparency.

Staff also now have to undergo mandatory anti-money laundering training while the bank is upgrading its IT system in order to better detect unusual transactions.