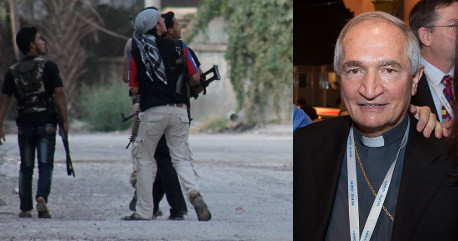 "A breathing space is opening, even though we know the difficulties there will be in the coming days," the Vatican's envoy to Damascus, Archbishop Mario Zenari, said on Vatican radio.

"Just the fact they are meeting and beginning to talk is something," he said, adding: "It is to time to end this avalanche of death and destruction and restore humanitarian law.

The Vatican said last week it would support all religious communities in the country in reconciliation and rebuilding efforts and voiced hope the recent interim deal over Iran's nuclear programme could have a positive effect.

International diplomats and Syria's warring sides have arrived for the crucial peace conference in the town of Montreux on Lake Geneva, which comes after months of wrangling that had threatened to derail the talks up until the last minute.

Regional power Iran – Syria's main ally – has been excluded from the talks. Zenari said the inclusion of all players at the talks would have been "ideal".

Officials have expressed little hope of a breakthrough, but have said bringing President Bashar al-Assad's regime and the opposition to the same table will be a sign of progress.