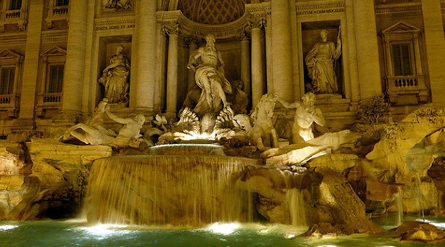 “Silvio Berlusconi is a neighbour? For heaven’s sake,” one of the neighbours of the luxury apartment block in Via in Arcione 98, a few steps away from the Trevi Fountain, was quoted in Il Fatto Quotidiano as saying.

Another lamented: “If he moves in, the peace will be over.”

Berlusconi’s 27-year-old fiancée, Francesca Pascale, was last Friday spotted viewing a property with an agent from Abramovich Real Estate by journalists at the Italian press agency, Agir, whose office just so happens to be in the same block.

Others in the community are looking on the bright side. “We’ll have better security,” a shopkeeper  was quoted in Il Fatto Quotidiano as saying.

Should Berlusconi be placed under house arrest for his fraud conviction, to be decided on April 10th, the new pad, reported to be on sale for €16 million, will certainly provide him comfort: from a huge terrace, he'll have a view of a "wonderful inner garden complete with orange trees, fountains in which fish and tortoises swim, and Roman ruins," according to a description on the website, Casa Trevi.