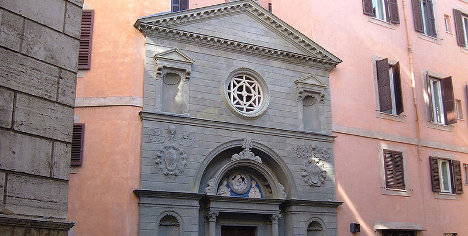 The blast went off outside the Saint-Yves des Breton church in Rome. Croberto68/Wikicommmons

The night-time explosion damaged a few cars and smashed windows on a small street where the church of Saint-Yves-des-Bretons is located, raising the possibility that it could be linked to Hollande's visit.

"A handmade bomb went off at 2:30 am (0130 GMT)…. There has been no claim of responsibility. Our investigation is ongoing," a police spokesman told AFP.

A spokesman for the French embassy in Rome told The Local they were waiting for more information from the police and would not speculate over whether the planting of the device was linked to Hollande's visit.

Pope Francis was due to receive Hollande later on Friday for the first meeting between the two, amid deep divisions in France over hot-button issues including abortion. gay marriage and euthanasia.

Vatican watchers say Francis is likely to press the Socialist leader on these issues in private.

"They will certainly not play hide-and-seek. There will be no holds barred," a high-ranking prelate told AFP on condition of anonymity.

Hollande, 59, is plagued by low popularity and hopes to reconcile with a Catholic electorate largely hostile to his policies.

He sees the visit as a chance to send "a strong message of dialogue and attention to the Catholics", an advisor said at a briefing ahead of the trip.

He may also be hoping some of the pontiff's popularity rubs off on him.

His quest will be made no easier by lawmakers' decision this week to greenlight a change in the country's abortion laws, effectively making it easier for a woman to terminate a pregnancy.

Anger among staunch Catholics has also been fuelled by plans for the legalisation of assisted suicide – with French bishops speaking out this week to condemn a topic Hollande promised to support in his electoral campaign.

Relations between part of the electorate and the government soured notably last year when France legalised gay weddings, despite hundreds of thousands of people taking to the streets to hold huge protests.

Some 110,000 frustrated Catholics have signed a petition calling on the congenial Francis to get tough and raise their concerns with Hollande.