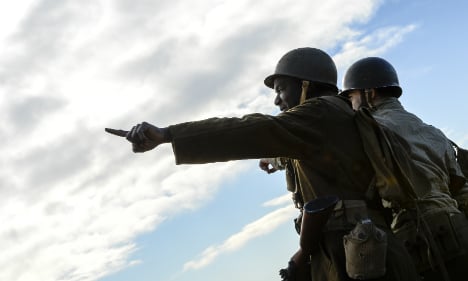 Thousands of American, British and Canadian troops lost their lives in and around Anzio in one of the key battles of the war which, after months of trench warfare, led to the liberation of Rome from the Nazis.

Rinaldi was a teenager at the time. He had been sent to Rome by the Nazis but returned once the allies landed, and was hired on the spot by the US troops as a translator.

"They landed without firing a shot, because there weren't any Germans. I was in Rome, I heard about it on the radio and set off for Anzio on foot," said Rinaldi, who is 86 years old.

"I wasn't scared, call it youthful recklessness! I got in the middle of it and helped load the weapons. Despite the war, it was a wonderful time for me," he said.

The Allies failed to press ahead with the advantage of surprise they had gained over the Nazis after outflanking German lines with their landings, known as "Operation Shingle", allowing the Germans to re-group.

The battle for Anzio dragged on until June 1944.

Seven thousand soldiers were confirmed killed on the Allied side and 5,000 on the German, with tens of thousands more reported wounded or missing in action.

One of the fallen was British lieutenant Eric Fletcher Waters, the father of Pink Floyd singer Roger Waters.

The musician is due to come to Anzio for a ceremony next month after recent research revealed the details of the fighter's death in a German counter-attack.

"It was chaos," said 90-year-old British veteran Stan Turton, who travelled to Anzio from his home in Sheffield for the commemoration.

Turton was on the HMS Spartan, a British warship which was hit by German bombs and sank with the loss of 51 lives.

"I thought I wouldn't get out," said Turton, who swam for two hours in the freezing waters off Anzio before being rescued by an American vessel and taken to Naples.

A small fishing port once favoured by Roman emperors, Anzio becomes a bustling resort in the summer months.

Condos and parasols now line the two long sandy beaches that were known by the troops as "X-Ray" and "Peter".

The town was almost entirely destroyed in the war.

Guns and mollusc-encrusted shells dredged up from the sea years later are now housed in a small one-room museum, along with black-and-white photos from the time showing the ruined buildings and piles of rubble.

"Anzio used to want to forget its past. Today, things have changed," said Patrizio Colantuono, the director of the museum and organiser of the yearly re-enactment on Anzio beach which brings together enthusiasts from around the country and abroad.

The enactment "allows us to explain to the new generations what happened here," he said.

Veterans have also donated uniforms and mementos from their time in Anzio to the museum and there are some of the more poignant stories from the battle, like the one of the Scots twins, John and Thomas Cairncross, who died on the same day, February 4, under Nazi attack.

In a corner, German gravestones with the Nazi swastika symbols lie hidden behind a motorcycle.

The Allied troops at Anzio were forced to dig in because German artillery had the area in their range.

"We lived in dug-outs, right up on the front line," said Alex Munro, 91, who served as a forward observation officer with a British artillery regiment.

"We made little holes in the walls where we put our mess tins and things. You could hear the Germans in the opposing trenches," he remembered.

"Conditions were okay during the day, but at night the big guns fired."