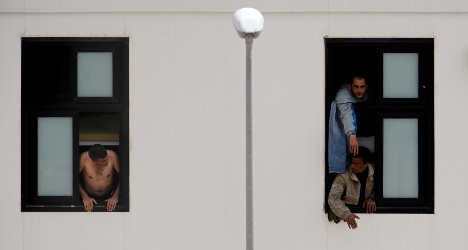 Migrants at an immigration centre on the Italian island of Lampedusa. Photo: Filippo Monteforte/AFP

The men, aged between 20 and 30, had already stitched their mouths shut in a week-long protest in December over their long stay in a supposedly short-term detention facility.

They had only ended that protest at the Ponte Galeria facility south of Rome after assurance that their cases would be speedily dealt with.

"It is clear that time in politics moves more slowly than it does for these people, who have gone from the drama of a difficult immigration journey to places of little dignity such as the detention centres," said Angiolo Marroni, a state official charged with protecting prisoners' welfare in the Lazio region.

"I hope that parliament keeps its word and quickly approves the necessary regulations to put an end to this shame," he said.

The men, who used a thread from a blanket and a small needle to sew their mouths shut, all made the perilous journey from Libya to the Italian island of Lampedusa on overcrowded dinghies.

More than 33,000 migrants landed in Italy from January 2013 to late October – nearly three times the number for 2012. Most come from impoverished African countries but now also from Syria.

In December, the European Union condemned the "appalling" conditions at some of the country's migrant centres, following the release of footage of naked asylum-seekers being hosed down at a facility on Lampedusa.

Lampedusa hit the headlines in October when a boat laden with migrants caught fire and capsized within sight of the shore, killing 366 people in the worst Mediterranean migrant tragedy yet.