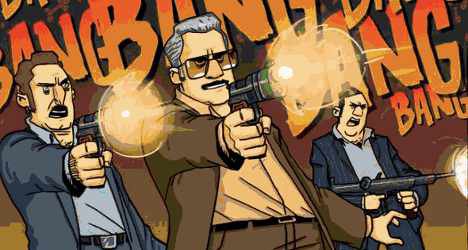 After fourteen years of working for Italy’s Parliamentary Anti-mafia Commission, Riccardo Guido is well aware of the dangers of denying the existence of criminal networks.

“Instead of politicians and people in the local economy combatting it, they continue to say – particularly in the north of Italy – ‘Here the mafia doesn’t exist’,” he tells The Local.

Proof that this approach is doomed to fail can be found in southern Italy, where Guido says local leaders before the 1970s ignored their mafia problem and allowed it to spread across the country.

It is now time for business and political leaders in Milan, Italy’s financial capital, to admit the city has been infiltrated by criminal networks, Guido says. This may not take the form of the brutal murders often depicted in Hollywood films, but it has become “a more radical problem”.

Earlier this month police arrested 90 people in the regions of Campania, Lazio and Tuscany, seizing criminal assets worth €250 million that had been reinvested in the Italian economy.

The same mafia groups that have permeated the Italian economy are also taking their business abroad, where Guido says politicians are failing to face the problem.

“The mistake made in the south [in the 1970s] is being repeated in other places. The first reaction when people talk about mafia in Europe is, ‘Here the mafia doesn’t exist’.

“[But] when you begin to dig, you’ll find that the mafia has been in France for a number of years,” Guido says, giving the example of a Marseille clan, linked to Sicily's Cosa Nostra, involved in drug trafficking.

In addition, Naples’ Camorra mafia, which gained international notoriety due to the 2008 film Gomorrah, is “part of the normal economic activity” in Spain, Guido adds.

Europol, the EU’s law enforcement agency, last year went further and said the Camorra is also present in France, the Netherlands, Germany and Switzerland, in addition to eastern European countries and the Americas.

The criminal networks of the Cosa Nostra and the Calabrian ‘Ndrangheta mafia spread as far and wide as Australia, Canada and the US, the 2013 Europol report said.

Criminality on such a vast scale is difficult to comprehend and, for many, appears impossible to fight at the local level.

This is why Guido created the character of Salvo, a schoolboy leading a personal fight against the mafia, in order to show Italians the role they can play in combating transnational crime.

As the protagonist of Guido’s new graphic novel, 'Salvo e le mafie' (Salvo and the mafia), the boy narrates how his father broke free from generations of Sicilian mafia men.

“It’s aimed at children, in part to explain the fight against the mafia but also to remember what has happened during this fight,” Guido says.

IN PICTURES: Cartoon charts Italy's mafia past and present

As Salvo is explaining how his great-grandfather, born in 1920s fascist Italy, joined the mafia, the books’ pages are also filled with the lives of those who have battled criminality in the country.

They include a host of figures from Cesare Mori, the “Iron Prefect” of Palermo who battled organized crime in the 1920s, to magistrates Paolo Borsellino and Giovanni Falcone, who were killed by the mafia in 1992.

“I want people to enter into the history,” says Guido. “Study your area, because then you’ll understand whether there are mafia links. This is fundamental.”

The line-up of anti-mafia Italians also reaches the present day, with the book’s preface written by Naples magistrate Raffaele Cantone.

While the graphic novel is presented as a children’s book, the added information on key people in the mafia story and the workings of organized crime make it essential reading for Italians unsure about how to tackle mafia on a local level.

“There’s much more response and activity from within civil society. When I first became interested in the mafia 20 years ago, there were about 10 organizations with around 1,000 people,” he says.

A number of anti-mafia campaigns have since sprung up, including the Addiopizzo organization which supports businesses that refuse to pay protection money. The idea has now spread beyond Sicily, with similar associations being founded, such as Sparagnamm in Naples.

Such movements are reflected in Guido’s book, with images of anti-mafia protests filling the later pages, coupled with a final plea from Salvo’s father: “We must change everything!”