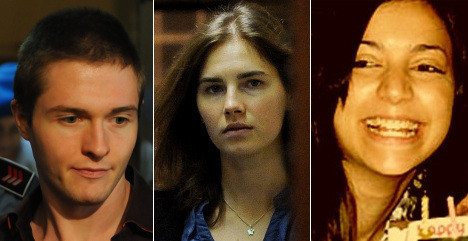 Knox, who has remained in the United States ever since an appeal court acquitted her and lover Raffaele Sollecito in 2011 of the murder of Meredith Kercher, will not be in Italy's supreme court to hear the ruling.

Instead, she has sent the court an email saying she was "not a monster" and explaining her absence from the retrial and verdict was because she was "afraid that the vehemence of my accusers will leave an impression on you".

The verdict is expected on Thursday. It is not clear how presiding judge Alessandro Nencini will rule.

Usually, Italy's court rules on points of law only, but in this instance it will foray into the merits of the case – even though the details have changed little.

The supreme court has revived the idea that Kercher – whose partially naked body was found in a pool of blood in the house she shared with Knox – died during a botched sex game with Knox and Sollecito.

Witness testimonies which cast doubt onto the pair's innocence were valid, the court insisted.

Its verdict will be the culmination of a process the supreme court began last year, when it overturned the 2011 acquittals on the grounds the appeal judge displayed "a rare mix of violation of the law and illogicality" and that the approach taken to DNA evidence and witnesses was flawed.

Whatever the outcome, an appeal by either side will send the case back before the supreme court again before the verdict is considered final.

Experts say it is unlikely that Knox could ever be extradited even if she is definitively convicted. But she has said she fears "becoming a fugitive".

A guilty verdict now could see Sollecito back behind bars or stripped of his passport to prevent him fleeing the country while the appeal process is exhausted.

Last week, an American woman claimed the 29-year-old had asked her to marry him in order to secure a Green Card, having first proposed unsuccessfully to Knox. Sollecito's lawyers said Tuesday that they were considering suing the woman.

More than one killer

A local drug dealer named Rudy Guede, whose DNA was found at the scene, is the only person currently serving time for the murder. But investigators say the knife wounds found on Kercher's body suggest there was more than one killer – a thesis supported by the supreme court.

Kercher was found with her throat slit and had suffered a "slow, agonising death," according to a coroner's report.

Forensic tests determined that she had been sexually assaulted, possibly even while she was being stabbed.

The Florence court has focused largely on the presumed murder weapon, ordering fresh DNA tests on a kitchen knife found in Sollecito's apartment.

A previously untested sample of DNA was shown to belong to Knox, but a tiny sample on the blade which the original forensic tests said belonged to Kercher was too small to retest and is considered inconclusive by the defence.

Prosecutors claim Knox's DNA on the knife and Sollecito's DNA on a bra clasp ripped off during the attack prove they stabbed Kercher while Guede raped her.

The prosecution say Knox removed traces of herself and Sollecito from the crime scene – a thesis ridiculed by the defence, which insists she could not have cleaned up some DNA traces while leaving those incriminating Guede.

Kercher's siblings are expected to attend court on Thursday for the verdict. Sollecito's father has said his son is likely to remain at home to avoid the media scrum, while Knox will wait for the news in her home town of Seattle.