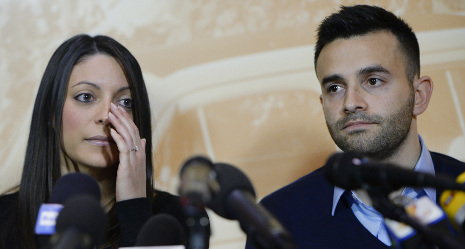 Stephanie Kercher and her brother Lyle during a press conference in Florence on Friday. Photo: Andreas Solaro/AFP

Stephanie Kercher was speaking on Friday morning at a news conference after a Florence court found Amanda Knox and Raffaele Sollecito guilty of her sister’s murder.

“Regardless now of a guilty or not guilty verdict, a lot has happened so it would be difficult to try and meet someone having had all that happen,” she said.

Knox, who was sentenced to 28 years and six months, has repeatedly said she would like to meet the Kerchers and visit Meredith’s grave.

Stephanie added that despite the guilty verdict, the family "might never know the truth".

"We can only go by what's out there. There's obviously a lot of evidence to suggest that the truth has been found, but there are more stages to this case."

When asked if Knox should be extradited from the US, Lyle, Meredith's brother,  said: "If somebody is found guilty and convicted of a murder and if an extradition law exists between those two countries, then I don't see why they wouldn't.

"I imagine it would set a difficult precedent if a country such as the US didn't choose to go along with laws that they themselves uphold when extraditing convicted criminals from other countries."

Meredith Kercher was found dead in the house she shared with Knox on November 2nd 2007 in Perugia in central Italy.

Knox's lawyers plan to appeal this latest conviction in turn to the Italian Supreme Court, but if they fail she could find herself flying back to a country where she has already spent four years in jail.