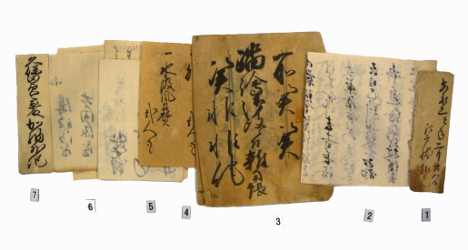 A detail of the hoard containing around 10,000 pieces of paper, collected by an Italian priest who lived in Japan last century. Photo: Biblioteca Apostolica Vaticana/AFP

The hoard contains about 10,000 pieces of paper, collected by an Italian priest who lived in Japan last century, mostly dating from the "Edo" period (1603-1867), when the country shut itself off from the outside world and declared Western religion illegal.

The wide-ranging collection, including memos from their curator, Father Mario Marega, who died in 1978, offers a rare opportunity to study details of how people lived through the tense religious persecution of the time, said Professor Kazuo Otomo of the National Institute of Japanese Literature.

The records, which contain annual surveys of residents' religious affiliations, could also provide a glimpse into population changes and other sociological dynamics of early modern Japan, scholars said.

"This unusually large volume of official records show policing and crackdowns and the deprivation of religious freedom," said Otomo, who will head the six-year project to analyse and catalogue the materials, due to begi in the next 18 months.

Unlike one-off finds of a few historical documents, the 21 bags of materials discovered in the Vatican Library in 2011 should allow scholars to study the minutiae of persecution and whether it differed over time or in specific communities, he said.

For roughly two centuries to the mid-1850s, Japan's samurai government, fearful of foreign invasion and colonisation, shut itself off almost entirely.

Japanese people were barred – on pain of death – from leaving the country and foreigners were only allowed in very limited areas, such as an artificial island in Nagasaki harbour.

Christianity, the harbinger of empires in other parts of Asia, was outlawed. Foreign missionaries – seen as the advance guard of an invading force – were ejected and converts in Japan were forced to renounce their faith.

Those who refused were frequently tortured and many executed, some by crucifixion.

Despite the stringent and brutally-enforced laws, Christianity survived, especially in parts of the southern island of Kyushu, where believers disguised their icons by making them resemble those used by Buddhists.

European missionaries were hidden by the faithful, sometimes for years in remote parts of the country such as far-flung islands, where significant Christian populations remain today.

Most official documents have been lost or were deliberately destroyed after the shogunate government was replaced in the mid-19th century.

The new civilian regime that ended the isolationist policy was eager to modernize, sloughing off what it saw as the backwardness of the past and aping European cultures and technologies.

Marega collected the documents while living in Kyushu before and during World War II. He later lived in Tokyo for many years until shortly before his death in Italy.

Among the materials in the trove were official records from the Usuki domain in Oita prefecture in Kyushu.

They show routine surveys of religious affiliation among residents, records of religious conversions, surveillance on the lives of the relatives and offspring of former Christians, and how officials forced residents to step on images of Jesus or Mary to prove they were not believers.

"This is the kind of find that makes people go weak at the knees," said Rumiko Kataoka, an expert on Japanese Christian history at Nagasaki Junshin Catholic University.

"Detailed official documents might shed light on how Christians kept their faith" in this area, she added.

Before the ban, Christianity flourished in 16th century Oita, where a local feudal warlord had given up Zen to follow Jesus, years after his meeting with Spanish missionary Francis Xavier.

"This might help give us a better understanding of the local history of Oita, but it might also shed further light on the central government's ban on Christianity," said Kataoka, who is not part of the project.

"It could also lead to various sociological studies. The residents' religious records, for example, precisely surveyed the population, showing the size of individual households," Kataoka said.

"With studies of local graves and relics, I think we can bring knowledge of Oita to enhance the project and enrich our local history," Sato said.

Otomo said only three of the bags have been opened, and researchers are yet to learn exactly what is inside the rest.

"This is a study of Christians. But it also can lead to a study of cross-cultural exchange. It can be a study of how communities handled freedom of faith," he said.

"It shows the relationship between a state and a religion. These are very much present-day issues for us to study.

"While this may be local history, it tells a global story," he said.