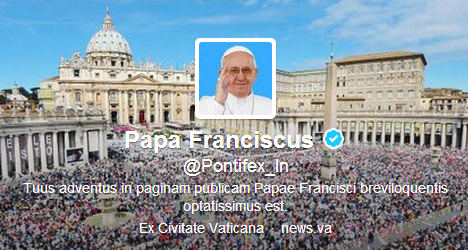 Two months after former pontiff Benedict XVI joined the social networking site, enthusiasts of the ancient language persuaded him to open an account in Latin, without banking on it having much success. The response stunned them.

Latin is "an international language, a transnational way of communicating which is still very much alive," said American priest Daniel Gallagher, an expert in the language and member of the team in charge of translating and posting the pope's tweets.

For its fans, the Italic language embodies "virtue and nobility of expression", as well as "the ability to communicate across centuries", he said.

While Latin is well suited to Francis's messages in terms of their brevity, his phrases are "difficult to translate, because his style is so informal", Gallagher said.

The expression "sourpusses" had the team flummoxed until someone thought to translate it as "vultu truci", a term taken from Roman playwright Plautus.

Gallagher and his colleagues have fun coming up with inventive ways to translate the latest technological or web-based jargon.

"We try not to stray too far from Cicero," the priest said in reference to the great ancient Roman orator.

"If he saw our translation, we would want him to have at least a vague idea of what it said!" he said.

Isabelle Poinsot, a follower from Paris, said she found it "refreshing to read a small, pure thought each day" and found "the discrepancy between a modern medium and an ancient language rather amusing".

Followers of the twitter account, @Pontifex_ln, are not just nerdy professors in stuffy academic offices or iPad-wielding priests. The largest
cohort are German, followed by Britons, Americans and fellow fans from China, India and Africa.

"We have every reason to think that many are young students, from universities, schools or even younger," Gallagher said, adding that some use the tweets as homework, setting out to translate them.

Others are journalists, lawyers, or people nostalgic for the Latin lessons of their youth, who get a kick out of translating a Francis phrase a day.

Some get so involved that they reply to the pope's tweets in Latin.

Elitism also plays its part: "Some follow the pope in Latin because it's a way to create a group. They enjoy belonging to an unusual community, with its own code. If you are able to translate it, you are accepted into the club," Gallagher said.

"What we think of as a modern phenomenon is no such thing. The satirical epigrams of the Roman poet Martial could have been tweets, for their brevity, conciseness, frankness and humour," he added.

The Vatican launched the Latin section of its website in 2008 under Francis's predecessor Benedict XVI, a keen advocate of the language, which is still used for the Holy See's most important official documents.

Knowledge of Latin was an unexpected asset for Italian journalist Giovanna Chirri, who had what was no doubt the scoop of her career in February 2013 when Benedict announced his retirement in Latin – and she was the only reporter who understood him.