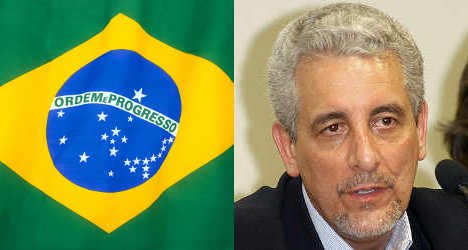 Henrique Pizzolato, who has dual Brazilian-Italian nationality and features on an Interpol wanted persons list, was sentenced last year to 12 years in jail for corruption and money laundering offenses.

"We can confirm that Pizzolato has been arrested in Italy," a police spokesman said.

The case culminated in convictions of 25 politicians, businessmen and bankers.

Media reports indicated Pizzolato was found in possession of a false passport when detained at Maranello.

Brazil's Folha de Sao Paulo indicated on its website the passport belonged to a brother who died in a car crash.

In a letter to his lawyer, Marthius Savio Lobato, Pizzolato said on leaving Brazil that he would demand a fresh trial in Italy, "before a court not subject to media diktats."

The pair were caught up in a huge investigation into vote buying between 2003 and 2005 during Lula's first term in office and both received jail terms.

Dirceu and Genoino handed themselves in to police in November to begin their sentences under a semi-open regime allowing them out during the day time but remaining in jail at night.